Catherine joined the Team in July 2015 and has particular responsibility for Broad Chalke, Berwick St John and Ebbesbourne Wake, Alvediston & Fifield Bavant churches. As Rector she also has responsibility for driving the development of the whole valley in our mission to serve God.

Catherine was previously Vicar of Winkfield and Cranbourne churches. She has been married to David for over 30 years and they have two children. Catherine can often be seen cycling around the valley and she also enjoys walking.

Currently Jenny has responsibility for the Churches in Britford, Coombe Bissett & Homington and Bishopstone. Jenny also is responsible for the work and development of our LPAs.

Jenny was ordained in 2001 and worked at St Thomas’s, Salisbury until 2009 when she become an Associate Team Vicar in the Chalke Valley (which she adores!). Jenny was a teacher and for many years was Chaplain for Salisbury Cathedral School, retiring in 2013, when she joined our team as Team Vicar.

She also has a Diocesan role as Support Officer for Associate Priests in the Sarum Archdeaconry. In 2010 she gained an MA in Religion from Winchester University.

Jenny has been married to Geoff for over 30 years and they have two sons, and at the last count two grandchildren! When not in the Valley, Jenny reads copiously, cooks, watches television and falls asleep – not necessarily in that order!

Jenny became a non-residentiary Canon of Salisbury Cathedral in 2018.

Roger was ordained in June 2019 as part time, non stipendiary, assistant curate in the Chalke Valley Benefice and has been concentrating his efforts and time mainly in the villages at the West End of the Benefice. Prior to ordination Roger trained for three years at Sarum College, Salisbury, and transitioned from a wide experience of gathered urban church, to rural church.

Roger has spent his life working in education, mainly in Northern Independent Schools, in diverse locations such as Derbyshire, Newcastle upon Tyne, Fleetwood, and the Wirral, before settling in the Wylye Valley where Roger and his wife, Gill currently live.  Roger's time in education, mainly in boarding schools, has encompassed a wide variety of roles teaching mainly Biology, but also Chemistry, Physics and RE. More recently he has served for 12 years as Head of Leehurst Swan School in Salisbury. Alongside this he worked for 15 years as an Independent Schools Inspector as well as serving on the Salisbury Diocesan Board of Education.

Roger's leisure time is spent gardening, kayaking, walking and DIY. He has recently refurbished an ancient Mirror dinghy.  Roger says he spends too long at his computer and loves Lady Grey (tea!).

Roger and Gill have two children, both now married and living independently, and three grandchildren, with another expected in 2022. Having spent much of their lives living in boarding schools with other people’s children as well as their own, they relish the energy and life children bring to our lives.

Roger says 'I seek to follow Christ wherever I am, recognising His power is the ultimate relationship and the goodness of God extends to all who turn to Him.' 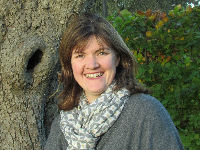 Emily works part time as Team Administrator for the Benefice. Her main responsibilities are managing communication and the organisation of Team wide activities.